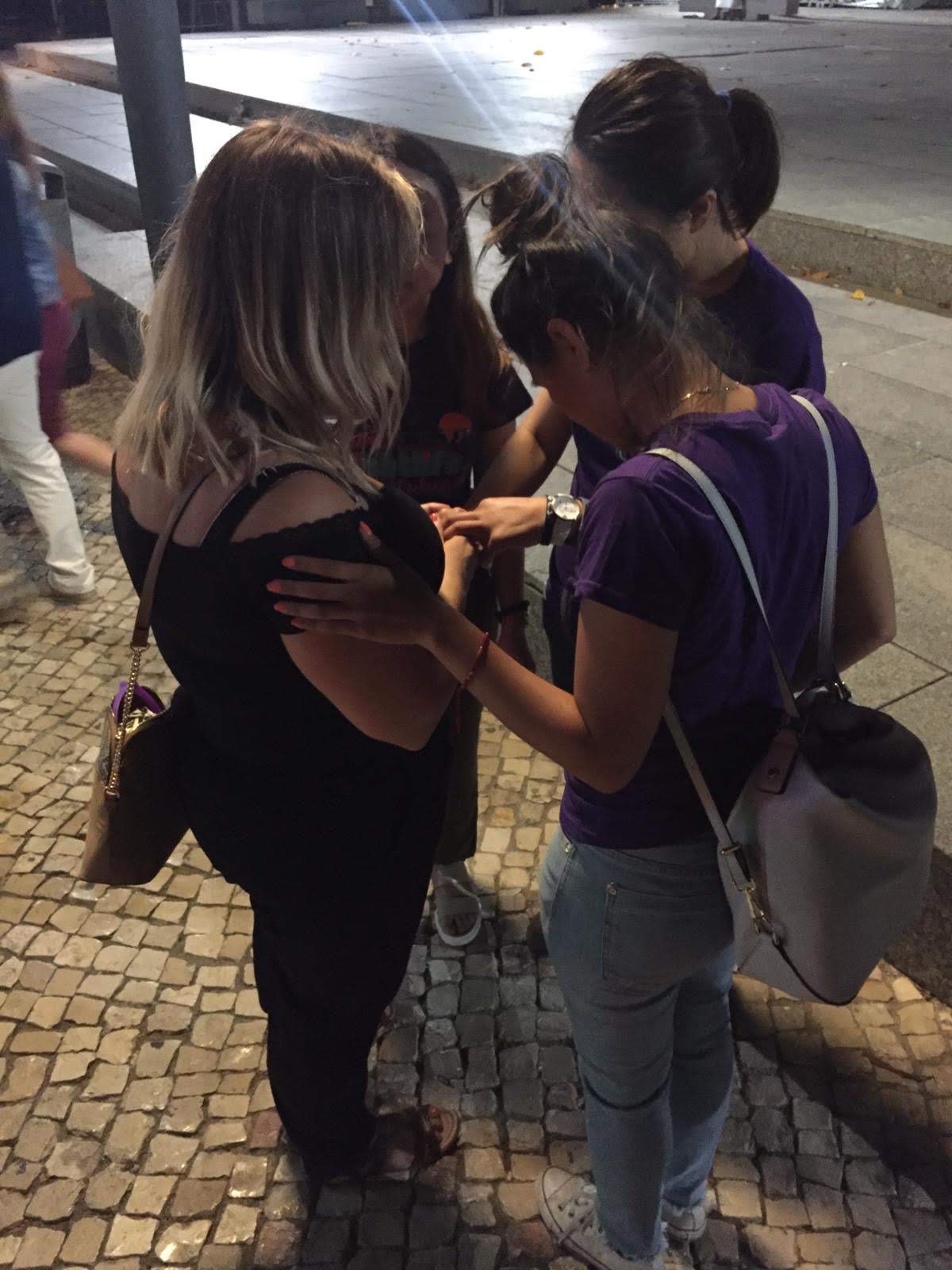 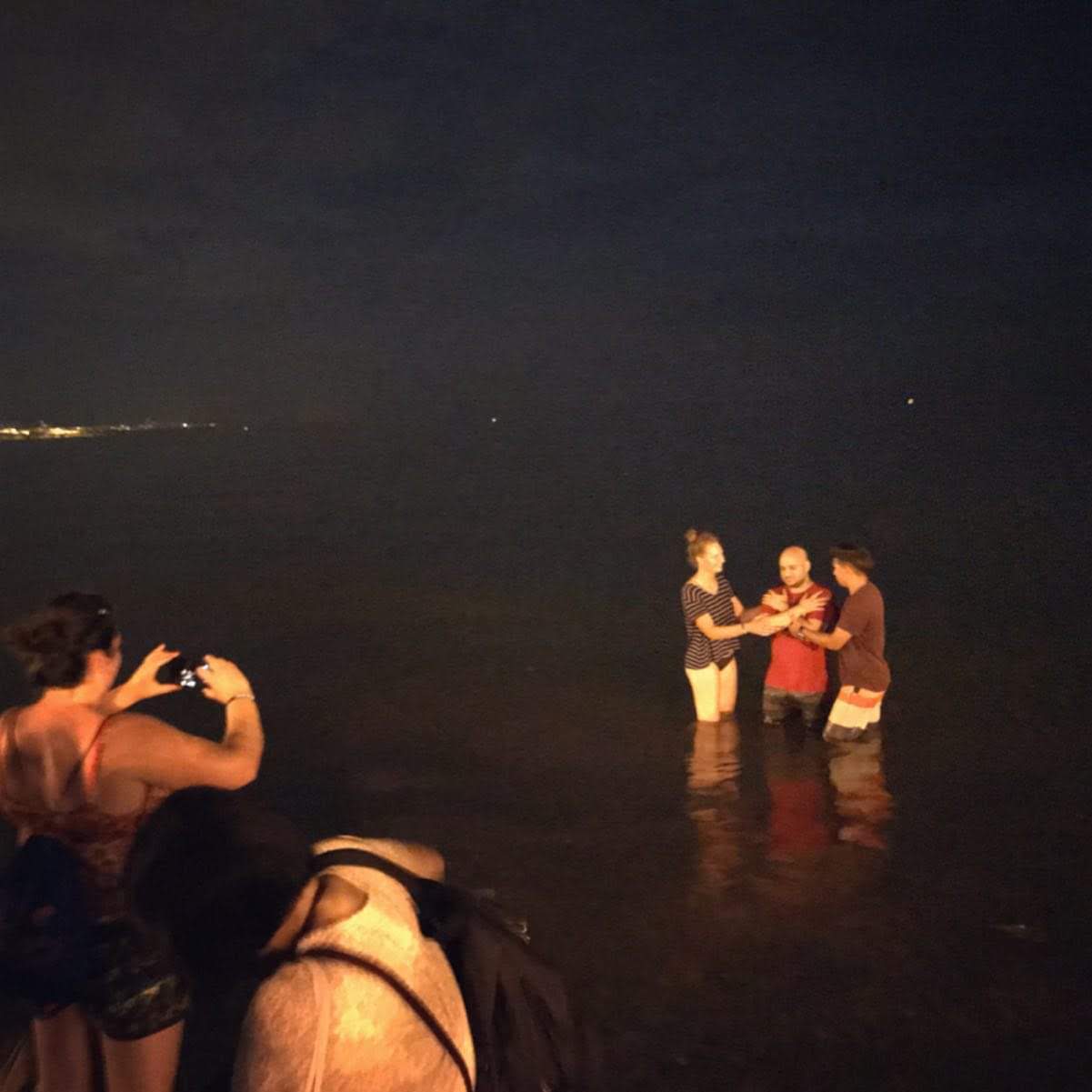 Testimonies from Years Past...

During our first time on the streets at SNO, some of us were asking God to lead us to people who needed His love. I wasn’t receiving any impressions or direction so, feeling quite unspiritual, I pointed to a man sitting on a bench and said “let’s talk to that guy.” I told him we were Christians and that we saw him sitting and wanted to talk to him. He said, “sure, let’s go for a walk”. We didn’t get very far before he told us he’d been seeking Jesus. Although a Hindu from India, he had been feeling drawn to the cross since living 1 year in Barcelona. He said he sometimes felt like he wanted a cross on him somehow, but wasn’t sure if his religion would allow it. He’d recently gone to a church to sit inside for an hour and feel some peace. We prayed with him and He encountered something; he saw rays of light enter his body and he felt a warm sensation above his ears. He wanted to meet our group so we introduced him. The SNO team explained further what it meant to repent and follow Jesus. In response he went away to write down some sins to confess to God and to consider what things in his life he should let go of.  The following night he met us again to be baptised in the sea, and fully surrender his life to God. He was keen to connect with a local church so we helped him with that. So thankful that we were available to help this guy on his journey!

Two Irish guys came to ask if we knew where the taxi boats were, because they wanted to visit a nightclub at another island. One of my friends told them where the boats were, but she also told them that we had something better than alcohol and drugs. One of them became interested, and he started to ask what it was, and how he could take it. She told him that what we have is called HS (Holy Spirit) and that if you take it you never have to take anything else! “But you can only receive it through prayer.”

So we were given the opportunity to pray for him.

He was freaking out for 15 min, while we tried to explain that it was the Holy Spirit that touched Him. He didn't want to believe it. So we prayed for him a second time..

Again he went crazy.. He started to panic: “I cannot believe in God because no one from my family believes in God!” We calmly tried to explain to him how much God loves him. He wanted us to pray for him a third time to see if he would experience the Holy Spirit again. So we prayed a third time for him. Then he could only exclaim "Fxxx… God exists, God is real!" He started to cry, just having had his first experience with God's love... someone's love that he didn't know existed. The next night he came to us with all his friends: about ten of them. We prayed for all of them.. and guess what? All of them experienced God's love.

God loves the fatherless and those who takes care of them. One night in Albufeira, God brought to us a British Woman who is a mother of two, as well as being a foster mother for two more children of her late sister & brother-in-law. We prayed for this mother and ministered God’s love for her on the street, reaffirming God’s care and provision over her family despite a challenging season. God delights in the sacrificial love that this woman hopes to show to the two orphan children! Her eyes were full of tears of joy and gratefulness and said that she received something so beautiful. She was unchurched but is considering maybe she should go to church again. God loves the fatherless and motherless and those who would go the extra mile to lay down their lives for them.

This website uses cookies to improve your experience while you navigate through the website. Out of these cookies, the cookies that are categorized as necessary are stored on your browser as they are essential for the working of basic functionalities of the website. We also use third-party cookies that help us analyze and understand how you use this website. These cookies will be stored in your browser only with your consent. You also have the option to opt-out of these cookies. But opting out of some of these cookies may have an effect on your browsing experience.
Necessary Always Enabled
Necessary cookies are absolutely essential for the website to function properly. This category only includes cookies that ensures basic functionalities and security features of the website. These cookies do not store any personal information.
Non-necessary
Any cookies that may not be particularly necessary for the website to function and is used specifically to collect user personal data via analytics, ads, other embedded contents are termed as non-necessary cookies. It is mandatory to procure user consent prior to running these cookies on your website.
SAVE & ACCEPT